Can the U.S. Learn From the Failing Infrastructure in Italy?

You will find more infographics at Statista The challenge is that infrastructure is basically the IT department of government. Rarely does anyone from the C suite walk down to the IT department of a company to say, “Good job, no hackers were successful today and all our tech ran smoothly.” Politicians get reelected by making people happy. Maintenance of existing bridges and roads doesn’t make for great photo ops and is often met with resistance by the electorate – NoGronda!Think this kind of thing can’t happen in the USA? Think again. In August 2007, the I-35W Mississippi River Bridge in Minneapolis collasped, killing 13 and injuring 45. A decade later, things haven’t improved.

You will find more infographics at Statista What happened in Italy, yes it did happen here and could happen again.

You will find more infographics at Statista It isn’t just our bridges that are endangering the nation. Our airports, dams, schools, sewer treatment facilities, energy grid, waterways, levees, ports, parks, roads, drinking water, and hazardous waste facilities are all in need of investment with the nation’s infrastructure getting a D+ in 2017 from the American Society of Civil Engineers . 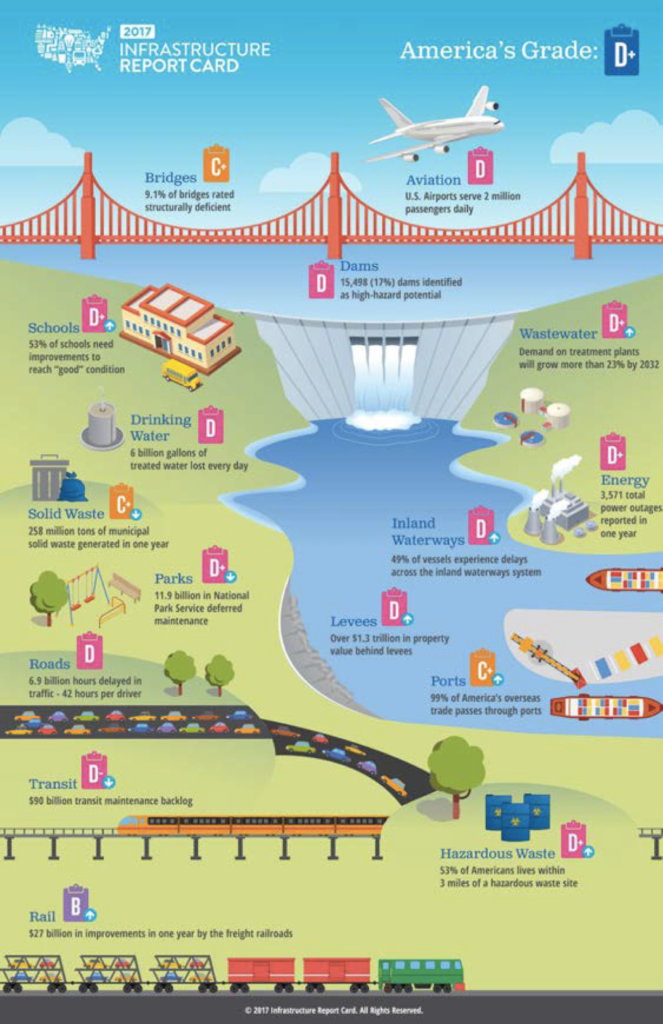 Hopefully, the current administration and/or those in Congress will use this tragedy to focus on America’s infrastructure needs. We’ve heard a lot of talk out of the current Administration about just this, and I hope this serves as a catalyst for the country. A weak infrastructure is a significant headwind to the economy while a modern and robust one becomes a tailwind. This is an area of great opportunity for those in D.C. to do what is necessary, for investors when we see this issue get the attention it deserves, which is the basis for our Rebuilding America index , and for Americans who would reap benefits across many aspects of our lives including less time wasted commuting to and from work or in air travel, less wear and tear on our cars, and lower prices for the things we buy thanks to reduced transportation costs.Personally, it would be really nice to be able to drive around my other home base in San Diego, California without regularly blowing tires and soaking my car seats with coffee thanks to the ubiquitous craterlike potholes.