Gold: The Power of Scarcity

The fast food world gave us an interesting case study in supply and demand last week. By now you’ve no doubt heard about The Chicken Sandwich, the surprise superstar menu item from Popeyes Louisiana Kitchen that’s launched 1,000 blog posts, op-eds and thought pieces.According to reports, the Cajun restaurant sold out of its entire seven-week inventory in just over two weeks. All of this despite no marketing campaign to speak of.As what often happens when demand outpaces supply this dramatically, the value of the Popeyes sandwich has exploded on the secondary market. One Maryland man managed to sell his for $100, an incredible 2,400 percent markup over the retail price of $3.99. In a viral Instagram video, rapper Quavo flashes a bag full of the chicken sandwiches and (jokingly) offers to let them go for “a thousand a chicken.”There are a few lessons investors can learn here—one of them being that people put a premium on scarcity.

Gold is an obvious example. The precious metal is both rare and finite, making it an ideal global currency. Although output continues to grow, the number of large, high-grade gold discoveries has been declining for decades now. Some experts, myself included, believe peak gold is already here.Copper could soon be in the same boat. The red metal isn’t nearly as rare as gold is, but because of surging global demand, mostly for use in electric vehicles and renewable energy, it’s expected to go into deficit in 2021.“A single wind turbine can have up to a ton of copper wiring in the massive generators at the top of the tower,” the Oxford Club’s David Fessler told me in an interview last month.Municipal bonds couldn’t be more different from chicken sandwiches—except when it comes to limited supply. Thanks in part to the 2017 tax overhaul, issuance of new state and local debt has been down for the past couple of years and is lagging the amount of bonds that are maturing. This has helped push up demand.

Mutual funds that invest in tax-exempt muni bonds have recently seen record inflows. In the first seven months of 2019, muni funds attracted more than $52 billion, the most ever for the January-July period since Lipper began reporting this data since in 1992.I believe it’s prudent to be adding munis right now. Recession indicators are blinking, including the U.S. ISM Manufacturing Index, which contracted in August for the first time since the financial crisis. In the past, muni bonds have performed well during economic pullbacks. In fact, municipal debt has delivered positive annual returns in all but four years going back to 1981.

Too much of something, on the other hand, can destroy its value. Look at what excessive money-printing has done to Venezuela’s struggling economy. The South American country’s inflation rate has risen to an unbelievable 10 million percent since 2018, according to the International Monetary Fund (IMF).Share dilution can be similarly destructive. When a company issues new equity, each existing share is worth less. Ownership becomes watered down, and stock prices can fall.Beyond Meat learned this lesson as recently as this summer. The California-based faux-meat company had a knockout debut in May, rising 163 percent on its first day—the best performing single-day IPO in about two decades. Shares were up 800 percent in late July when Beyond Meat announced a secondary equity offering of 3.25 million shares. Investors responded by knocking the stock down some 17 percent.At U.S. Global Investors, we’re particularly mindful of outstanding share growth over time. This is especially the case when evaluating gold mining stocks, some of which have a history of diluting shareholder capital. Way back in 2013, I showed you how this could be one reason why gold stocks were underperforming bullion.We like gold royalty and streaming companies partly because shares are not diluted. Take a look at the chart below. Since 2012, the top three royalty companies—Franco-Nevada, Wheaton Precious Metals and Royal Gold—have increased the number of outstanding shares between 11 percent and 27 percent. Now compare that to the constituents in the VanEck Vectors Junior Gold Miners ETF (GDXJ). At 57 percent share growth, ownership has been more than halved over the past seven years.

Gold Has Been a Good Hedge in Times of Economic Instability

As I recently showed you, gold has been a good hedge in times of economic instability. In 13 out of 15 of the worst months for the S&P 500 Index going back to 1987, gold outperformed the market, sometimes by as much as 110 basis points.To be sure, the risks are mounting. On Sunday, the U.S. imposed new 15 percent tariffs on $300 billion worth of Chinese goods. Approximately 92 percent of all apparel imported from China will be subject to taxation, paid for by American companies and consumers, so we should expect to see increased inflation.In a note to investors last week, Goldman Sachs raised its estimate of the new tariffs’ impact on GDP growth. “The most recent proposed tariff escalation would boost U.S. consumer prices slightly further than previously estimated and would reduce U.S. growth slightly further as well,” bank analysts wrote, adding that they’ve raised their estimates of the impact to GDP growth to 0.7 percent by the end of this year. The U.S.-China trade war, which has entered its 18th month, has contributed to a rally in Treasury bonds as investors seek safety in government debt. This has pushed yields across the entire U.S. yield curve to record or near-record lows. Last Tuesday, the yields on the two-year, five-year, 10-year and 30-year bond were all trading below 2 percent for the first time ever.

Precious metals have also rallied. Gold is now trading near a six-year high, while the price of silver broke above $18 an ounce for the first time since January 2018. The gold-to-silver ratio—which measures the number of ounces of silver it takes to buy one ounce of gold—has fallen from its recent high of 94 and now stands at around 83.

In the late 1970s, Chinese leader Deng Xiaoping helped spur his country to new heights through the creation of seven Special Economic Zones (SEZs), mostly in eastern port cities. With markets liberalized, money poured in from foreign investors, and China was well on its way to becoming a middle-income economy. Shenzhen, the first of these SEZs, has undergone among the most dramatic (and fastest!) growth periods in human history. Forty years ago, it was a sleepy fishing town of around 30,000. Today, it’s home to not only 12.5 million people but also one of the world’s biggest stock exchanges by market cap. 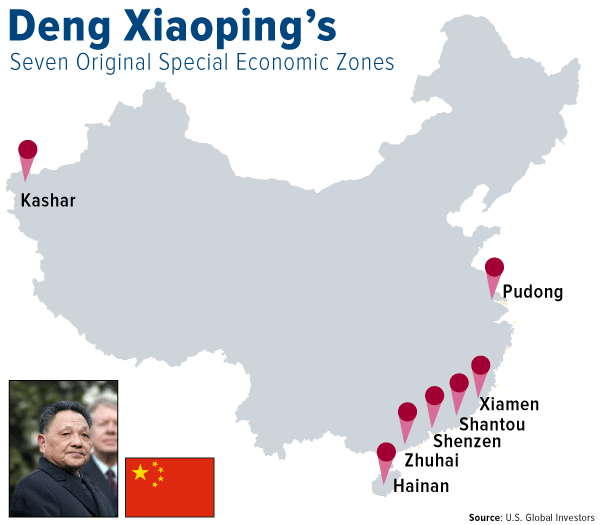 My reason for bringing this up is that China, partly in response to the trade war, is set to create new free trade zones (FTZs) in six provinces across the country, according to the South China Morning Post.The move “adds free trade zones in underdeveloped provinces, making them more attractive to high quality manufacturing in a bid to support their local economies and help weather the impact from the escalating trade war with the United States,” the Post writes.I for one am excited for this news.Related: Positioning Your Portfolio for the Market’s Next Move For the latest, make sure you’re subscribed to our weekly, award-winning Investor Alert!