It was the best of times, it was the worst of times. A tale of two world leaders, U.S. president Donald Trump and China president Xi Jinping—both of whose countries have among the world’s best economies right now. But whereas Xi is playing Santa Claus to the rest of the world, doling out loans to finance-starved countries, Trump is playing Scrooge, waging an economic war with Canada, the European Union, China and others.Respected economist Art Laffer, whom I’ve written about before, has always supported leaders who ignite global trade rather than close off its borders. A full-blown trade war, Laffer said recently, would be a “curse” on the U.S. economy.Post-World War II, it was the U.S. that led global trade and infrastructure build-out—the Marshall Plan in Europe, the Interstate Highway System domestically. Both projects required massive amounts of commodities and raw materials, and employed hundreds of thousands of people.Today, of the two leaders mentioned above, it’s Xi who has a clear foreign policy when it comes to trade and infrastructure.

Case in point: This week, Beijing will host the Forum on China-Africa Cooperation (FOCAC). The summit, which takes place once every three years and is attended by representatives from 52 African countries, touches on areas as diverse as technology, trade, infrastructure, diplomacy, culture and agriculture.During the last forum, in 2015, China pledged as much as $60 billion toward Africa’s development in interest-free loans. The Asian country, in fact, has increased its investments in the continent around 520 percent over the last 15 years, according to Global Trade Magazine.As just one example, Kenya agreed to let China finance and build a standard gauge railway (SGR) connecting two major cities at a cost of $3.8 billion. Contracted by China Road and Bridge, the Mombasa-Nairobi SGR is Kenya’s largest infrastructure project since it declared independence from the U.K. in 1963.Meanwhile, U.S. fund flows to Africa have been receding, and they’re expected to slow even more during Trump’s administration.

Xi isn’t doing this out of the goodness of his heart, of course. China, having been Africa’s largest trading partner for nine consecutive years now, likely expects its investments to pay diplomatic and economic dividends for many decades to come.Even Trump’s own commerce secretary, Wilbur Ross, acknowledges that the U.S. must do more in Africa. “By pouring money into Africa,” Ross wrote on CNBC in August, “China has seen an opportunity to both gain political influence and to reap future rewards in a continent whose economies are predicted to boom in the coming decades,” due mainly to a younger demographic.

The most well-known among China’s projects is the Belt and Road Initiative (BRI), one of the most ambitious undertakings in human history. The biblical-size trade and infrastructure endeavor—a sort of 21st century Silk Road—could cost 12 times as much as what the U.S. spent on the Marshall Plan to rebuild Europe following World War II. The BRI has the participation of 76 countries from Asia, Africa and Europe, and is poised not only to reshape globe trade but also raise the living standards for more than half of the world’s population.According to the International Monetary Fund (IMF), the “BRI has great potential for China and participating countries. It could fill large and long-standing infrastructure gaps in partner countries, boosting their growth prospects, strengthening supply chains and trade and increasing employment.”The BRI, which turns five years old this fall, announced in 2013, will have a strong presence in Eastern Europe, also a prime destination for China FDI, as the countries there offer a wealth of metals, minerals and agricultural products.According to Stratfor, Chinese companies have invested as much as $300 billion in Eastern Europe over the past decade. Last May, China and Ukraine agreed to cooperate on joint projects valued at nearly $7 billion, and in November, it was announced that China Railway International and China Pacific Construction would build a $2 billion subway line in the Ukrainian capital, Kiev. More recently, Chinese engineers with China Harbor Engineering completed a $40 million dredging operation in Ukraine’s Yuzhny Sea Port, allowing it to receive larger ships.Like the Marshall Plan before it, the BRI will require tremendous amounts of commodities, metals and fuel.In 2011, members of our investment team and I had the opportunity to see one of China’s high speed trains firsthand. The train averaged 185 miles per hour during our 923-mile trip from Shanghai to Beijing. As I wrote then, “I’ve traveled to all corners of the world and have seen many things during my travels, but viewing China’s explosive growth as it flies by you is something I will never forget.”Related: Is There a Massive Windfall Coming for China’s Fast-Growing Tech Giants?

In light of all this, there’s no lack of negative news on China right now. I see headline after headline on the country’s “slowing economy” and “weakening consumption,” but like most things are in the media, these proclamations are overblown.Look at China’s purchasing manager’s index (PMI). Fresh data out last Friday showed that manufacturing expansion in August accelerated slightly faster than in the previous month. The PMI hit 51.3, up from 51.2 in July and beating analysts’ expectations of 51.0. This was the 25th straight month of economic expansion, despite what I earlier described as the Trump-Kudlow trade war with China. Also, as the Peterson Institute for International Economics (PIIE) wrote last week, “there is no empirical evidence that consumption in China is weakening,” contrary to what “official” retail sales data show.The PIIE’s Nicholas Lardy cited Alibaba’s recent announcement that sales rose 60 percent in the most recent quarter compared to a year ago—“a sign that Chinese retail sales data likely do not fully capture China’s burgeoning digital retail.”“In any case,” Lardy continued, “retail sales are an increasingly less useful measure of consumption, as China’s large and still growing middle class is spending a growing share of their rising income on education, health care, travel and other services that are not captured in official data on retail sales.” 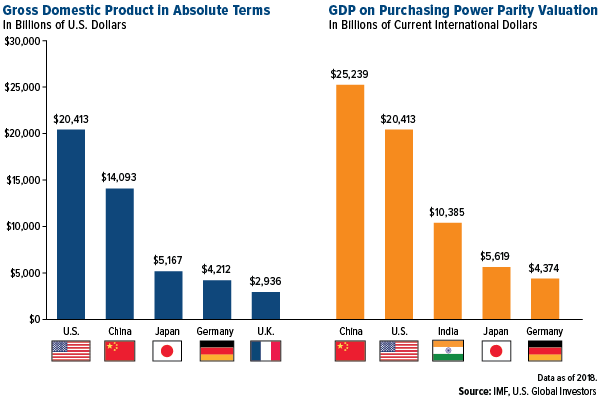 Savvy investors, I believe, get it and can see the opportunity in the world’s number one economy, as ranked by purchasing power parity (PPP). Reuters reports that, in the week ended August 22, U.S. investors poured $572 million into funds that invest in Chinese equities. That was the most for such funds since January.Although some expect Trump to impose tariffs on $200 billion additional Chinese imports, perhaps as early as this week, “investors are expecting Beijing to continue counteracting the effects of the [trade] dispute with increasingly relaxed monetary and fiscal policies,” Reuters says. Curious to learn more? Watch this short video on investment opportunities in China!