As the Middle East’s main business hub, Dubai is the most populous city in the United Arab Emirates (UAE) and home to the world’s tallest manmade structure, the 163-story Burj Khalifa, which climbs to a neck-craning 2,717 feet. Designed by Adrian Smith, who attended Texas A&M University, the Khalifa Tower is an engineering marvel and stands as a symbol not only of the futuristic and forward-thinking look of this oil-rich country but also its emphasis on seeking intellectual capital from all over the world.

Last week I had the pleasure of attending the annual Young Presidents’ Organization (YPO) event, held this year in Dubai, where I learned best practices on leadership as well as how to strike the right balance between business and family life. The YPO has 24,000 peer-to-peer members who together employ 15 million people across 130 countries and generate $6 trillion in revenue every year.

It was an enriching experience, equaled only by my admiration for what the UAE has managed to accomplish with its oil revenues. Tall construction cranes can be seen in every corner of Dubai, signaling urban growth. There are plans to expand its efficient light rail system, which shuttled me from the airport to downtown for only $1. I was happy to see many of the train stations colored gold. 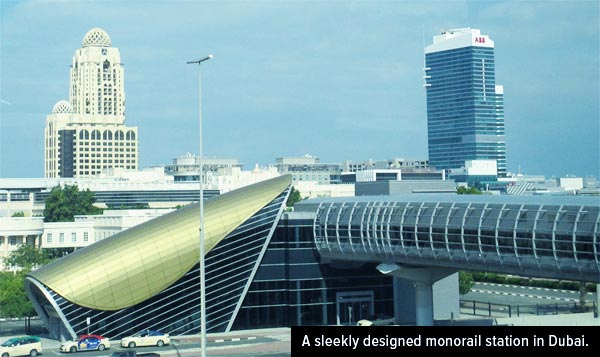 The Dubai Mall, the second-largest in the world, is a wonder to explore. It contains 1,600 stores and restaurants from the U.S. and Europe and also features the Dubai Aquarium, one of the world’s largest. You truly feel as if you are in America, with the most popular restaurants being Five Guys Burgers and Fries, the Cheesecake Factory and U.S. pizza chains. I was surprised to see Tex-Mex food being delivered on motorcycles. As is the case in China and elsewhere, spending on infrastructure is key for long-term sustainable growth. Countries and city-states such as Singapore , Hong Kong and now Dubai have spent wisely on new airports, sea ports, subways, light rail and hospitals—all wise fiscal spending that has always given the U.S. a huge advantage. With oil revenues, UAE leadership has paid for citizens to earn degrees in America and military training in the U.S., including San Antonio, Texas. The city of Dubai has a massive U.S. naval base for regional security. This is the sort of extravagance and attention to detail travelers have come to expect from the country’s most popular attractions. At the Palazzo Versace hotel in Dubai, for instance, visitors can beat the desert heat by relaxing in air-conditioned sand. In Abu Dhabi, the Shaikh Zayed Grand Mosque is believed to have the world’s largest carpet, capable of accommodating more than 44,000 worshippers. The intricate craftsmanship of the marble and gold along the walls and columns is breathtaking to behold.

I also want to point out that the digital banking system has made a huge impact on the UAE’s economy. I just read an article in the Khaleej Times newspaper, reporting that electronic payments have boosted the UAE’s GDP by $3.7 billion in five years. This increase is indicative of a trend of rising card usage across many countries, as you can see in the chart below. In the same edition of the newspaper, I was interested to read that for the third year in a row, Singapore has been listed as the most expensive city in the world, followed by Zurich and Hong Kong. According to the article, “Falling commodity prices have created deflationary pressures in some countries, but in others, currency weakness caused by these falls has led to spiraling inflation.”

Light at the End of the Tunnel? The IEA Calls a Bottom in Oil Prices


Despite its relatively small size in population and land mass, the UAE is the world’s sixth-largest oil producer, following the U.S., Saudi Arabia, Russia, China and Canada. Among Organization of Petroleum Exporting Countries (OPEC) members, it’s the second-largest, after Saudi Arabia.

These rankings might very well rise in the coming years, however, as the Middle Eastern country plans to expand production between 30 and 40 percent by 2020, even as Brent crude prices have struggled to crack $40 per barrel.

But on a global scale, oil production is finally dropping—and that’s constructive for prices. In a report released on Friday, the International Energy Agency (IEA) writes that “prices might have bottomed out,” citing a February decline in both OPEC and non-OPEC output and hopes of U.S. dollar weakness.

Although I’m cautious, the current recovery is in line with oil’s seasonality trends for the five- and 15-year periods, which show that prices have risen between March and the beginning of the busy summer travel season. The PHLX Oil Service Sector Index has gained 4.4 percent since the beginning of the year, while prices have rallied above their 50-day moving average, touching three-month highs.

As the IEA points out, this rally is being spurred by optimism that OPEC and Russia can agree on a production freeze—not a cut, as some people think. A meeting date has yet to be decided upon, however, presumably because Iran announced it will not agree to an output freeze until it reaches its pre-sanction market share.

Like Iran, Saudi Arabia has resisted capping production. To plug up the deficit, it’s reportedly seeking up to $8 billion from international banks, the first time it has done so in more than a decade. The kingdom is also considering issuing foreign bonds and listing a part of its state oil company, Saudi Arabian Oil, or Aramco.

With WTI up 25 percent in 2016 and 3 percent in March, investor sentiment has improved since October, when it crossed into “panic” territory for the first time since 2011.

U.S. Companies Looking for $50 Per Barrel


To remain profitable, most U.S. producers need oil prices to be above $50 per barrel—a level we haven’t seen in eight months. In such an environment, U.S. oil companies are finally beginning to make meaningful production cuts, with the IEA expecting producers to remove more than half a million barrels per day from the market this year. In December, the monthly year-over-year change in production turned negative for the first time since September 2011. The number of North American rigs in operation fell below 400 for the first time since December 2009, according to Baker Hughes, helping to support prices. Until now, per-well productivity has been slow to budge. Years of $100-per-barrel oil incentivized companies to develop new ways to extract crude, including fracking, and these technological advancements have greatly increased efficiency. Today, not only can a new well be drilled in record time, it can also produce four to five times what it could have only five years ago.

What Oil Companies Can Learn from Airlines


Highly-leveraged companies across the globe have had little choice but to trim their workforces, curb expenditures and let go of undeveloped projects. According to consulting firm AlixPartners, overall capital spending fell 20 percent in 2015, with a further decline of at least 30 percent expected this year.

These adjustments, the most severe since the oil rout in the 1980s, have saved or raised global exploration and production (E&P) companies $130 billion, says Deloitte Consulting. But this won’t be enough for many companies: Nearly a third of all pure-play E&P companies worldwide are at high-risk of bankruptcy this year.

That’s not necessarily a bad thing. A little over a decade ago, the airline industry also found itself in extreme duress. A large percentage of carriers landed in bankruptcy court, and a wave of consolidation swept through the industry. Today, airlines are positing record quarterly profits.

In the past year, we’ve already seen some huge mergers and acquisitions in the oil industry—think Dutch Royal Shell and BP, as well as the proposed Halliburton and Baker Hughes deal. It’s likely we’ll see many more in the coming months. In the meantime, short of geopolitical turmoil, a coordinated production cap agreement among OPEC and non-OPEC countries might be the only option to firm up prices.