For years, Adam Sharp has helped accredited and retail investors get in on the ground floor of some of the most promising early stage investment opportunities. These include not just venture capital but also equity crowdfunding and cryptocurrencies, which he added last year to his two research offerings, First Stage Investor and Crypto Asset Strategies. I recently had the pleasure to speak one-on-one with Adam, whose deep knowledge of the rewards and challenges of early stage investing is bar none. Read on to get his unique insights into the future of bitcoin trading, the promise of cannabis stocks and what he looks for in a startup.

When did you first get involved with bitcoin?

I got into the financial newsletter industry in about 2008, doing marketing and search engine optimization (SEO), and I started reading people who come from the libertarian, Austrian school of economics—Bill Bonner, Porter Stansberry and some others. It was on one of these online message boards in 2011 that I first heard about bitcoin. It might have been trading for less than a dollar. I watched it for a while, and in 2013 I finally decided to pull the trigger because there was a reputable exchange at this point. I got in at $84 a coin, and I’ve held onto them ever since.It’s been a wild ride, and the volatility we’re seeing right now is admittedly hard. It’s difficult to maintain a positive community during a correction like this, but I think the alt-coins that are able to survive the downturn are going to come out even stronger and be in a really good place in a couple of years.

Early on, did you experience any pushback from friends and colleagues?

I might have convinced a few people successfully to buy bitcoin, but not many. It wasn’t easy, trying to describe this new alternate financial system that had maybe 100,000 participants around the world. I think part of it is that, at the time, I didn’t fully know what was going to happen. Maybe it would be worth a lot of money some day? Now that I’ve been through a couple of cycles, I can see how the growth works, and I believe it’s sustainable over long periods. Bitcoin and cryptocurrencies in general have built up big enough communities and momentum that I think they can become a major monetary force in the world. What’s really going to drive this forward are currency crises around the world, not to mention growing distrust in banks and governments. It’s a slow process, and it won’t happen overnight.

So where are the institutional investors?

The institutional crypto boom we’ve been anticipating is real. The infrastructure is in place now to support big investors. Contrarians will likely lead the way. It might be as much as a year out, but eventually you’ll have a couple of guys move heavily into cryptocurrencies and start posting some attractive returns. And then I think you’re going to see many numbers of followers jump in. Speaking of that, you wrote recently about Intercontinental Exchange (ICE), owner and operator of the New York Stock Exchange (NYSE), launching Bakkt. Many people are calling this project a game changer. Explain what Bakkt means for cryptocurrency trading.Bakkt is definitely the biggest news of the year. It’s exactly the type of qualified, regulated custody solution big financial firms need to be comfortable enough to get started in crypto—and it launches in November. It has the backing of ICE, the NYSE, Microsoft, Starbucks and others. It’s going to be a huge step in the right direction in terms of getting big firms on board, and I think it should help pave the way for a bitcoin ETF as well. The market’s reaction so far has been nothing short of ecstatic. 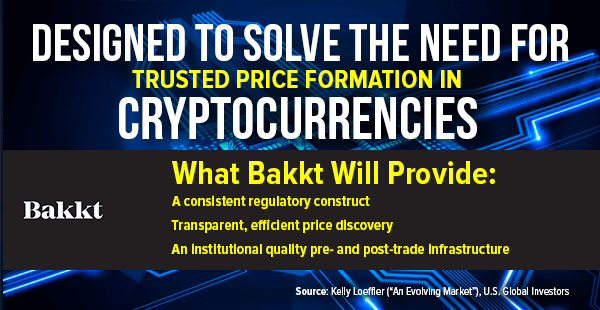 Perception is definitely an important factor when writing about not just cryptocurrencies but also cannabis, an industry you also follow. What do you think will be the biggest challenges in changing people’s minds about these asset classes?I think we’ve already hit the tipping point with cannabis. It’s just a matter of how long the Feds can last under the pressure. Right now in every state, there are kids with epilepsy and other disorders, and their parents are desperate for new treatment options. This is what’s driving the entire thing. Kids and adults both need access to cannabidiol (CBD) oil—which isn’t the psychoactive part of marijuana, by the way—and it’s getting tougher for government officials to deny them this.What’s convinced a lot of skeptics is that, not only can you treat epileptic children with CBD oil, you can also get them off Xanax and other incredibly addictive sedatives. The medical potential is limitless, touching on pain relief, insomnia, anti-inflammation, appetite and many other applications. The pharmaceutical companies are probably terrified, and they should be.Related: Marc Lichtenfeld’s Outlook for the Rest of 2018

And yet we still know so little about it.

We’ve discovered as many as 113 different cannabinoids, but so far very little research has been done. Most of it isn’t happening here in the U.S., either, and I’m afraid we could fall behind the rest of the world. In recent months, for example, some very promising studies in Israel have shown that autism can be treated with CBD and tetrahydrocannabinol (THC). We’re just beginning to scratch the surface. Let’s move on to private equity and venture capital. Global private equity firms raised a record $453 billion in 2017. Why do you think this space is booming right now? What are the contributing factors?A lot of it has to do with the Enron scandal in 2001 and the Sarbanes-Oxley Act (SOX) that was enacted afterward, which made it many times more expensive to be a publicly traded company. To be clear, I think public markets are a very good thing overall for companies. They enforce discipline, and they make things transparent. But more and more, people want the privacy of being a private corporation. Combined with SOX, this is what’s leading the boom in private equity. This huge venture ecosystem has sprouted up to meet demand, and companies now have access to the best deals, the best networks and the most capital. If you’re a company like Uber, you really don’t need to go public anymore.

One thing we’re constantly trying to find for our members is different ways to invest in private companies. There are a few good publicly traded stocks through which you can access private equity. With equity crowdfunding, you can also invest in individual startups that are raising money online. It’s really a fascinating industry, and it’s a lot of fun because you get to work with young entrepreneurs. I believe it’s the future of capital formation.I should also add that the whole initial coin offering (ICO) phenomenon was partly a reaction to the lack of opportunities in public markets.

What do you look for in a startup?

My favorite startups are those that haven’t raised much, if any, funding, but they’ve built the business with sweat equity and elbow grease. If they’ve invested their own money, that’s great, but if they’ve boot-strapped their way to a couple million dollars in revenue, that’s the ideal situation for me. It doesn’t really matter what industry it’s in, as long as the company’s growing at a fast and sustainable rate.Other than that, I look for startups headed by people who are experts in their field, with a deep background and understanding. Ideally the founder or chief executive has a magnetic personality and can attract capital, talent and press. You want somebody that can tell their story well, and that people want to work for and write articles about. I’d like to think that when I talk to a founder I can tell how much magnetism they have, but you do get false positives from time to time. You co-founded and write for a number of subscription research services. Tell us about some of these projects, what they focus on and how our readers can sign up for them.We believe early stage investing and cryptocurrencies are the two leading alternative investmentsthat are available to everyday investors, so that’s what we try to focus on.Our first service, First Stage Investor, covers startup investments. Basically, we look at all of the equity crowdfunding deals that are on the market at any given time and we try to find the best ones for our members to invest in. We have a cryptocurrency portfolio in First Stage Investors that we started last summer, so you get a mix.Our other service is called Crypto Asset Strategies, which, as the name implies, is crypto-only, with the exception of a couple of publicly traded stocks. We look for the most promising bitcoin and Ethereum competitors—coins that are 1/100th or 1/500th the size of bitcoin or Ethereum. And then we do the research. We talk to the founders when possible, and we recommend what we feel are the best ones to our members. Curious to learn more about the blockchain and cryptocurrency market? Stay up to date by subscribing to the FREE, award-winning Investor Alert!