U.S. Economy Turns on the Afterburners—Is a Rate Hike Next?

Quick, think back nine years ago to June 2006. Can you recall what was happening then?

Let me give you some hints. Shakira’s “Hips Don’t Lie” was blasting from radios, and moviegoers were lining up to see The Da Vinci Code. The U.S. was deeply involved in Iraq, where Saddam Hussein was being held and awaiting trial. And with Windows Vista still in beta testing, Bill Gates announced he would step down as chairman of Microsoft.

So when will they be raised again? This Wednesday the world will tune in to see if Fed Chair Janet Yellen can answer that question. Though it’s anyone’s guess what she’ll say, there’s no denying that many of the economic indicators the Fed is keeping an eye on have sharply improved lately.

This has huge implications for investors, a topic I touched on during my recent keynote address at the Canadian Investment Conference in Vancouver. You can watch a brief segment below.


The U.S. jobs market in May was strong on several fronts, indicating that the economy has indeed turned a new corner. Businesses added 280,000 jobs, beating estimates by more than 50,000, while jobless claims stayed below 300,000 for the fourteenth straight month.

Hourly wages rose 0.3 percent in May, 2.3 percent for the year. This is pulling people back into the labor force and has helped stabilize the still-low participation rate.

Among those finding work are young people, whose employment rate has risen over 10 percent in the last five years to add three million new workers. Investment banking and research firm Evercore ISI estimates that this trend will be sustained for the rest of the decade.

As the firm points out: “This age group drives economic growth.”

All of this is good news for individuals and businesses alike. I said in a recent Frank Talk that businesses should see job creation and wage increases as opportunities to build a new demographic of consumers and investors. We’re seeing this unfold, as consumer spending is way up. Retail sales climbed 1.2 percent in May, while car and light truck sales grew 8 percent, leaving estimates in the dust. So far, 2015 is turning out to be a stellar year for automakers such as Ford, held in our All American Equity Fund (GBTFX) , as they aspire to reach the psychologically important 17 million units sold.

To meet supercharged auto demand, Ford plans to reduce the number of days its assembly plants are shut down this summer, from two weeks to one week.

$5.6 Trillion in New Aircraft Orders over the Next Two Decades…


Airlines are also positioned to benefit handsomely from an improved U.S. economy. Last week, the International Air Transport Association (IATA) announced that it expects the industry’s net income to ascend to a record $29.3 billion this year, an increase of 80 percent from 2014. The group also projects that return on capital will exceed borrowing costs, an industry first. 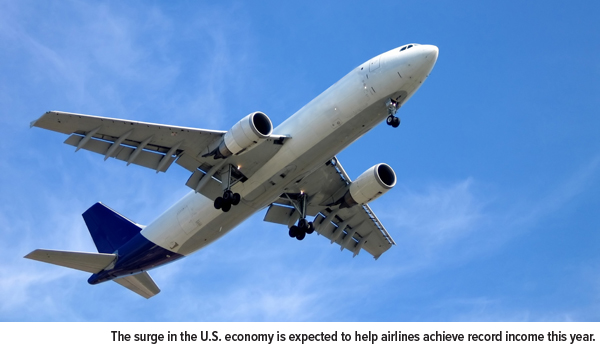 Airlines are so optimistic of sustained economic momentum that a staggering $5.6 trillion in new aircraft orders are expected to be placed over the course of the next 20 years. That’s according to Boeing, which we hold in our Holmes Macro Trends Fund (MEGAX) . In its latest outlook report, the aircraft manufacturer says that commercial jet fleets will more than double over this period, from 21,600 units to 43,560 units. Close to 60 percent of these new aircraft will be to accommodate growth in global air travel demand.

…And $6 Trillion in Business Deals over the Past 16 Months


In the past 16 months, businesses have authorized over 1,000 deals—including mergers and acquisitions (M&A), initial public offerings and stock buybacks —for a total of $750 billion as of May. The biggest M&As right now are chemical producer BASF’s $35 billion bid to buy Syngenta’s seed business, and the possible acquisition of T-Mobile by Dish for the same amount.

To fund these and other deals, businesses are increasingly turning to banks, which recently lent out $16 billion in a single week. This year, loan amounts are expected to surpass the previous record, suggesting that banks are gaining faith in borrowers’ ability to make payments.


Everything seems to point to a rate hike—if not this year, then within the next 12 months. The idea might worry some investors, but it’s important to keep in mind that rate normalization from current levels indicates that the economy is improving.

For municipal bond investors, this means staying with or moving into quality, shorter-term munis—the very kind our Near-Term Tax Free Fund (NEARX) invests in—as their prices are less susceptible to rate fluctuations than longer-term bonds are.

As you can see below in the hypothetical example using a two-year, 10-year and 30-year Treasury, the further out the maturity date and higher the rate hike, the more your security would be affected. Again, these are Treasuries, not municipal bonds, but munis could be similarly affected.

One last thing to be aware of: After a stellar performance in 2014, munis have traded sideways lately as investors await news from the Fed. The challenging nature of the bond market right now should not change your overall diversification strategy if it has always included fixed income.

And when rates do rise—whenever that might be—our team will be able to reinvest our maturing bonds in bonds that pay higher yields.