Goldilocks Expectations Are Meeting up Against Some Tough Realities

This week it was all about the politics and the market wasn’t too keen on what transpired, despite some positive surprises on the economy. Wednesday’s FOMC meeting announcement and Fed Chairman Powell’s press conference led to the major indices reversing earlier gains to close at the day’s lows. Friday’s announcement from Trump on China tariffs had the markets in the red from the start. The Goldilocks expectations heading into 2018 are meeting up against some tough realities that so far have kept the markets rangebound as we wonder, “Is the best behind us?”


Monday all the major indices closed in the green and the Dow Transports rose to the highest level since January versus the Dow Utilities, which fell to the lowest level in four months thanks to rising bond yields and investor moving portfolios away from defensive bond proxies. In fact, the ratio of Dow Transports to Dow Utilities has just broken out to a new record high. The strength in transports is typically a bullish sign for equity indices. Tuesday the Dow Jones Industrial Average closed down one point, but the S&P 500 managed to notch its eighth close in positive territory out of the past nine as the Nasdaq and Russell 2000 also closed in the green.

On Wednesday we learned that the Federal Reserve expects to hike four times in 2018, as opposed to the three hikes discussed in prior meetings, and Chairman Powell’s press conference gave the market heartburn with the Dow Jones falling in the final hour to close at a 119 point loss. Only two sectors were able to hang onto gains in light of the FOMC decision, Consumer Discretionary Select SPDR (XLY) +0.15% and Healthcare Select SPDR (XLV) +0.02%. Real Estate dropped over 2.3% and telecoms were hit hard by the fallout from the merger approval for AT&T (T) and Time Warner (TWX), a move that highlights one of the drivers behind our Digital Lifestyle investment theme.

Thursday the markets resumed their upward trend, helped in part by strong Retail Sales report. The Consumer Discretionary ETF (XLY) has, as of Thursday’s close, posted gains for every trading day in June and closed above its open every single day. It looks like much of the strength here is coming from the retail sector, with the Retail SDPR ETF (XRT) utterly dominating since the start of the month, outperforming the broader S&P 500 by nearly 4%.

Thursday the European Central Bank (ECB) announced that it would further taper asset purchases from €30 billion/month to €15 billion/month with purchases ceasing in 2019, but it will continue to reinvest redemptions. The euro fell against the USD by the most in one day since Brexit given that no rate change is planned until the end of the summer in 2019, much further out than the markets had priced. Global bond markets rallied in the wake of the decision.

Friday the major equity indices opened in the red after we learned that President Trump intends to impose 25% tariffs on $50 billion in imports from China, who quickly vowed to respond with, “equal scale and equal strength.” Bond markets rallied across the board despite the recent boost to Q2 GDP expectations on fears that this latest trade tantrum may lead to all-out trade wars. Last week the AAII Bullish sentiment index rose to a four-month high of 44.8% from 38.9% the prior week, the escalation in trade war talk could reverse that.

Taking a step back and looking at the bigger picture of the stock market over time we can see that the ratio of cyclical to non-cyclical sector stocks in the S&P 500 has reached a 40-year high, yet another indication that we are in the later stages of this expansion. If we look at the spread between the ratio of just Consumer Discretionary and Consumer Staples stocks, it is at a record high going back to 1990, with the prior record having been set at the end of the 1990s with the dot-com boom. The record low was in 2009, one of the best times to have gone seriously long the major equity indices.

We are also seeing the relative strength of S&P 500 Growth over S&P 500 Value at near record highs, the only other time in history that growth has so significantly outperformed value was during the dotcom boom. In fact, according to research by Bespoke Investment Group, going back to 1995 there were only 43 trading days scattered between February and July 2000 where the S&P 500 Value Index was underperforming the S&P 500 Growth Index by a wider margin – that’s less than 1% of all occurrences. 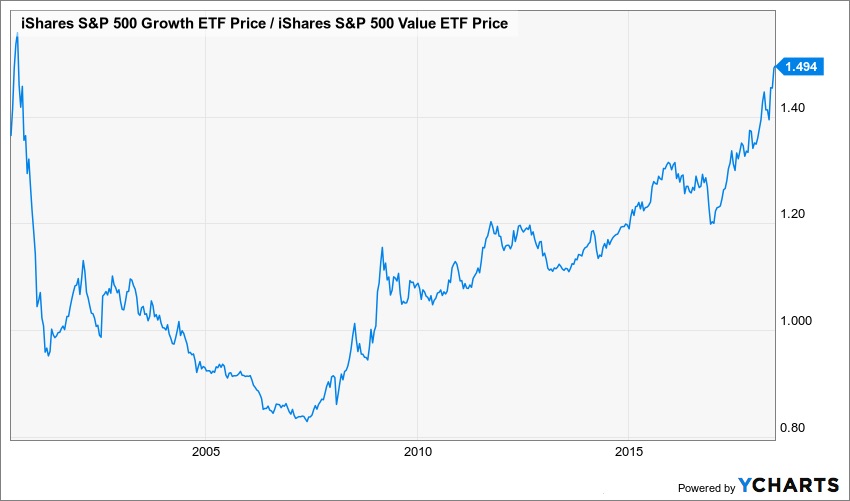 Tuesday the National Federation of Independent Businesses (NFIB) released its May report which found small business optimism rising to the second highest level in the 50-year history of the survey. The NFIB President, Juanita Duggan noted in the report that, “Main Street optimism is on a stratospheric trajectory thanks to recent tax cuts and regulatory changes.” However, Labor Quality once again topped the list of issues facing small businesses with the 23% of business owners reporting it their most important problem, the second highest level on record and a level not seen since late 2000. While taxes and red tape continue to be cited as a problem and come in at number two on the list of biggest problems, over time Labor Quality has become increasingly more worrisome. 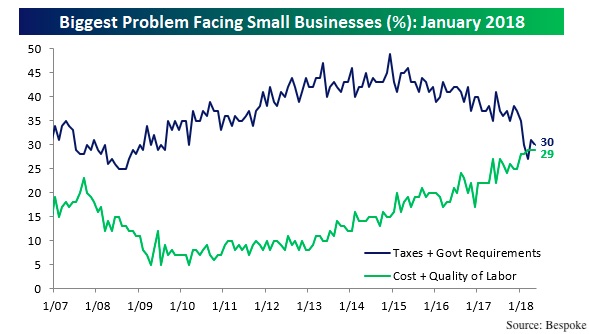 This week’s report on the Consumer Price Index (CPI) delivered right on expectations for both Core and Headline, rising 0.2% month-over-month. The Producer Price Index data showed increased momentum in year-over-year price increases facing businesses. Both headline and core indices came in above estimates, while core ex-trade services was slightly below. Total and goods-only year-over-year increases are both up to the highest levels since 2011.

Related: Is There Only a Little Left in This Expansion?

Retail sales for May surprised to the upside this week, rising +0.8 from April, doubling expectations. Ex-autos, gasoline and building materials, sales rose +0.5% versus the +0.4% expected. 10 of the 13 subcategories saw an increase and department stores had their best month in 18 months, up +1.5%. Year-over-year brick and mortar is experiencing its best run-rate in 13 years, which had led to the S&P 500 Retailers to be up +9% so far this year.

The biggest concerns for the week came from the Federal Reserve’s Open Market Committee decision to raise rates four times in 2018 and the ending of the one-month trade truce with China as President Trump announced 25% tariffs on some $50 billion in Chinese imports. Another list of $100 billion of trade actions is apparently also being pulled together.

I’d like to review a few of Chairman Powell’s comments during his press conference. I discussed my take on his assertions earlier this week on Cheddar and TD Ameritrade .

As for the initiation of trade hostilities with China on Friday, this is going to get messy. First off, President Trump has a good basis for wanting to take action. About 70% of the software in use in China today, valued at nearly $8.7 billion, is pirated and China is the source of 87% of the counterfeit goods seized upon entry into the United States. That being said, these tariffs are technically illegal under the very international laws we helped to establish under the World Trade Organization. Where an international dispute falls within the scope of coverage of the WTO treaty, and this does, taking unilateral action without first going to the WTO for a legal ruling on whether there is a violation is itself a violation of the treaty. The United States is not permitted by the international rules to which it has long since agreed to be both judge and jury for its own complaint. Like I said, this is going to get messy.

The bottom line for the week


While the US economy is looking stronger, I am concerned that the factors behind where we are seeing strength are not long-term in nature. Add to that a global environment in which we are seeing a reduction in the pace of central bank supplied liquidity, rising rates within the US, slowing growth outside of the US, an incredibly tight US labor market, and the potential kick off of global trade wars. That leaves me with the question, “Is the best behind us?”