On the Road (Again): Remembering Kerouac

As luck would have it, a day after finishing Kerouac: His Life and Work , by Paul Maher Jr., my wife and I hit the road, leaving Jacksonville, Florida in a rented Toyota Yaris at noon on a Monday, determined to traverse the U.S. via Interstate 10 in record time. Which we did. The sun was still high on the orange horizon when we decided to make our final overnight stop in Blythe, California (only a couple hours short of L.A.) on Wednesday, a little more than 55 hours later. It was 109 degrees Fahrenheit in Blythe at six in the evening. (All the liquor store clerk could say was "You shoulda seen it last week, when it was a hundred twenty-two!")On a trip like that, it's hard not to think of Kerouac, who (of course) crisscrossed the U.S. many times, by automobile, flatbed, and boxcar, with side-trips to Mexico, with and without (in)famous fellow traveler Neal Cassady, Jr., that mysterious, bigger-than-life all-American miscreant without whose antics Kerouac's oeuvre would be slimmer than a road-flattened squirrel.Cassady turns up unannounced throughout Maher's book, adding welcome piquancy. Through Maher, we get an admirably accurate portrayal of Jack Kerouac (thanks to archival material that wasn't generally available prior to 2004), showing the iconic author to be perhaps a bit fonder of marijuana than previous biographies had him, and more definitively heterosexual, while also more introverted and mama's-boyish. The outlines of Kerouac's personality become clearer in the reflected light of Cassady, however, while at the same time, we get an edifying glimpse of Cassady as being more than a one-dimensional psycho-brat who stole cars and juggled women; we see (a bit, at least) what Kerouac saw in him, which included a deeply thoughtful literary side. Cassady, like his then-wife Carolyn, was astonishingly well-read (having especially appreciated Spengler, Dostoevsky, and Shakespeare) and penned a 16,000-word letter to Jack in December 1950 that proved pivotal in Kerouac's writing career. Now known to scholars as the "Joan Anderson letter," Cassady's rambling, stream-of-consciousness autobiographical narrative of mid-December 1950 was so transformative for Kerouac that he declared (in a reply to Cassady) "it was a moment in literary history when I received that thing & only sweetwife & I read it & knew," adding: "If that ain't life nothing ain't."It was barely four months after the Joan Anderson letter that Kerouac, living in New York City, fed a roll of teletype paper into his typewriter and began pounding out his masterpiece, On the Road, as a single 125,000-word paragraph, which was completed in just 20 days (on April 22, 1951). Kerouac initially showed the scroll to close friend John Clellon Holmes, whose novel Go (1952) would be the first of the beat bestsellers (although Kerouac had previously published a Thomas Wolfe-inspired novel,The Town and the City, which fell into obscurity after lukewarm reviews). Holmes gave a supportive critique of the manuscript. The two went for a walk, and Kerouac said: "You know, kid, your book and mine constitute a new trend in American literature" (to which Holmes replied "Amen").But a few days later, when Kerouac rolled his scroll out on the floor in front of his editor, Robert Giroux, the latter was horrified, saying "How the hell can a printer work from this?" Kerouac was then urged by John Clellon Holmes to take the manuscript to his editor (Rae Everitt)—who was similarly horrified. Even more worrisome (arguably) was Neal Cassady's reaction to the novel. Cassady was not able to read the full manuscript (at this point), but in reaction to portions of it (and Kerouac's summary) he declared it thematically "trivial" and urged Kerouac to consider making it merely Book One of a longer, Proust-like three-volume set. 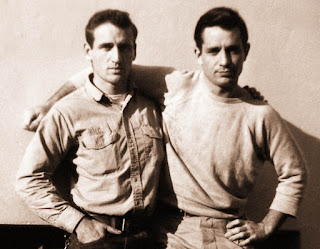 Neal Cassady and Jack KerouacWhen On the Road finally appeared in print in 1957 (after years of privation and wandering on Jack's part, with a side-trip to Tangier to see the drug-addicted Bill Burroughs, during which time Kerouac typed up manuscript pages ofNaked Lunch for Burroughs in exchange for food), Kerouac had a stroke of good fortune: Charles Poore, the intended reviewer ofOn the Road for The New York Times, a conservative critic who almost certainly would have savaged the book, was replaced (for that day's issue) by Gilbert Millstein, who hailed On the Road as "an authentic work of art." Millstein correctly predicted that many critics would misunderstand the work, but also pointed out that On the Road "is the most beautifully executed, the clearest, and the most important utterance yet made by the generation Kerouac himself named years ago as 'beat,' and whose principal avatar he is."From that moment on, Kerouac was in high demand for interviews (in print and on TV) and found a ready roster of publishers for his magazine articles and books; and yet, the money that came in ($100 to $500 for articles, $1000 to $5000 for book advances, plus a modest royalty stream from On the Road) was barely enough to allow Kerouac to maintain a modest house on Long Island and an injurious alcohol habit. In spite of (or because of) his new popularity, he still found himself firmly bound to "the slaving meat wheel."In November 1966, just two months after his mother experienced a debilitating stroke, Kerouac married childhood friend Stella Sampas (his third wife), who was nearly five years his senior; the family moved to Lowell, Massachusetts two months later. In September 1968, Jack, Gabrielle (his mother), and Stella moved to St. Petersburg, Florida. A year after that, in a nearby bar, Kerouac aroused the ire of some African American customers who thought he was mocking them; they took him outside and beat him, breaking his ribs. On October 20, 1969, the 47-year-old Kerouac disappeared into his bathroom after breakfast and began vomiting blood. He was rushed to the hospital, where he received 30 pints of blood before being declared dead early the next morning. The official cause of death was "gastrointestinal hemorrhage, due to bleeding gastric varix from cirrhosis of the liver, due to excessive ethanol intake over many years."Jack's death came shortly after Neal Cassady's. In February 1968, Cassady's all but lifeless, drug-overdosed body was found beside some railroad tracks in San Miguel, Mexico. (A nearby hospital was unable to revive him.) Ken Kesey, who had befriended Cassady four years earlier (when Cassady drove Kesey's party bus cross-country), paid to have Cassady's body cremated and the ashes sent to his wife, Carolyn.In his life, as in his writings, Kerouac campaigned against conformity, thwarting convention in word and deed, celebrating and exalting the point of view of what he so often liked to call (invoking Spengler) the fellaheen: the hobos, vagrants, drifters, itinerant laborers, and displaced nobodies of the world, those who haven't just "dropped out," but rather, had nothing and no place to "drop out of" to begin with. To tell their story, he juxtaposed words, images, and thoughts in previously forbidden ways, thinking in French, transcribing in English, yielding up staccato bursts of experiential word-love, electric and raw. Encountering Kerouac's English for the first time is like being the first human to discover an eel. Shock and awe, old school. Paul Maher, Jr. has done an invaluable service by distilling the essence of Jack Kerouac's life into 555 skillfully researched pages, in a poignant, well-told story that paints a somber picture of a life cut tragically short by alcohol and demons.One only wishes the book were longer. Kerouac: His Life and Work , by Paul Maher, Jr., ISBN 1-58979-366-8, Taylor Trade Publishing (2004).