'Safe' Stocks Are No Longer Safe in the Age of Disruption

Imagine losing 20% of your nest egg in the market.For many folks it’s just gut-wrenching. So investors often pay giant premiums to buy stocks they believe are “safe.”You probably know that fast-growing stocks in exciting industries may be pricey. But boring, slow-growing stocks are often expensive, too—if they’re perceived as safe.And while you might not realize it, there’s a good chance you’re paying through the nose to keep your money safe.

The “Safest” Stock on Earth

You Must Pay Dearly to Own Safe Stocks

We’re Living in the Age of Disruption

Take Procter & Gamble PG[NYE] - $103.65 0.22 (0.21%).It’s a 200-year-old company that’s grown into the 15th-largest publicly traded company on earth by selling essentials.Its brands include Gillette razors, Tide laundry detergent, Crest toothpaste, Dawn dish soap, and Bounty paper towels.No matter what happens in the markets, we’ll always brush our teeth, wash our clothes, and clean the dishes. That’s why selling necessities is a rock-solid business.From 1982­–­2012, Procter & Gamble grew its sales 28 out of 30 years. This track record is why P&G has long been considered one of the safest stocks on earth.P&G trades for roughly 25X its profits.That’s very expensive for a business that’s seen profits drop 20% over the past decade. For reference, the average S&P 500 company trades for 21X profits.If you own P&G stock, you’re not paying for growth. You’re not paying for a shot at big profits. You’re paying a steep price for one thing: safety.For decades, P&G stock has held up its end of the deal.For example, when the S&P 500 cratered 30% from the summer of 2007 through the end of 2009, P&G held strong, losing just 1.5%.Take Amazon AMZN[NGS] - $1,837.28 18.42 (1.01%), the most iconic disruptor stock.The online giant has put dozens of companies out of business in the last few years.By selling stuff online for cheap, it has disrupted big retailers like Toys “R” Us, Sears, Circuit City, and RadioShack into bankruptcy.In 2000, online sales totaled $27 billion. This year that figure will jump above $550 billion—a 20X leap in less than two decades.By claiming a big chunk of this growth, Amazon has driven its stock over 100,000% since it IPOed in 1997: 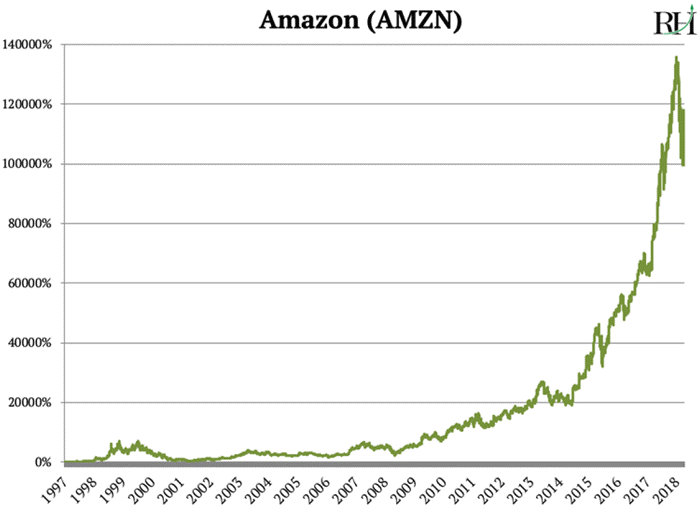 But while everyone’s been focused on Amazon’s takeover of retail, it has been preparing an even more disruptive assault on “safe” businesses.

In the past three years, Amazon has launched more than 100 of what it calls “private label” brands. They are Amazon’s own products, sold under different names.For example: Its “Presto!” brand sells toilet paper and paper towels. And “Basic Care” sells cough and flu medicine.Amazon now sells its own diapers, dish soap, laundry detergent, baby wipes, and around 5,000 more everyday items.There’s not a whole lot of difference between most “essential” items.Crest toothpaste is roughly the same as Aim, which is roughly the same as Colgate. And do you really care if the batteries in your TV remote are Duracell, or Energizer, or a “private label” Amazon brand?Findings from research firm Jumpshot show Amazon already controls 97% of the online battery market. And 94% of online kitchen and dining product purchases happened on Amazon last year.The key here is Americans are buying more and more essentials online.The fastest-growing category on Amazon is food staples—like breakfast cereals. Personal care products like soap and toothpaste are a close second.Amazon raked in roughly $7.5 billion through selling its private label products last year. Research from investment firm SunTrust suggests this will climb to $25 billion by 2022.

Amazon Has a “Trojan Horse” in 100 Million American Homes

Over 100 million Americans pay $119/year for Prime membership. Prime is Amazon’s subscription service that gets you free delivery.Prime members tend to buy a lot of stuff on Amazon. According to leading research firm eMarketer, Prime members spend 5X more than regular customers on Amazon. And one in every two Prime members buys something from Amazon at least once a week!As part of Prime, Amazon offers a program called “Subscribe & Save.” In short, it lets you create an automatic subscription to thousands of products.You simply ask Amazon to send you laundry detergent monthly, and a container of it will show up on your front porch at the same time every month.Amazon has spent billions developing these so-called “frictionless” services. The idea is to make it so quick, easy, convenient, and cheap to get basics through Amazon, you’ll rarely bother going to stores anymore.Related: Cheap ETFs and Mutual Funds Dupe InvestorsRelated: Would You Rather Invest in a Unicorn or a Gazelle?

Amazon Started Pushing Its Own Products to Prime Members

Amazon’s subscription service has been around for a couple of years. What’s different now is it has begun to heavily promote its own basic products… instead of ones made by other companies like P&G.Log onto Amazon and see for yourself. It now features its own private label products prominently at the top in almost every category.And if you order by voice—through Amazon’s Alexa device—Amazon automatically sends you Amazon brand products.Amazon is now encroaching on the territory of formerly safe stocks like Procter & Gamble.My research suggests it will gradually suck the life out of these companies as more and more “essential” purchases move online.

I’m Not Just Picking on P&G

As the 15th-largest publicly traded company on earth, P&G has the most to lose. But its “safe” peers face the same big problem.Unilever UN[NYE] - $57.94 0.27 (0.46%), which owns household brands like Axe deodorant and Dove skin care, has seen its sales sink below 2001 levels.Nestle NSRGY[OTO] - $95.60 0.06 (0.06%) sells popular products like Poland Springs water and Nescafe coffee. Its business has flatlined since 2005.All three of these stocks trade for higher than 20X profits.Their businesses are not growing…Their stocks are expensive…And the most disruptive force on the planet—Amazon—is invading their turf.Does that sound like a safe place to put your money?