The first curveball was the impact of timing in the post “ Timing is Everything? Or is It?” We explored how the success or failure of an investment plan is due in large part to when an initial investment was made, a seemingly random variable. Over the time horizon analyzed, the ending value of a $100,000 investment in the S&P 500 after ten years could have been as high as $343,033 or as low as $87,006, based solely upon which January 1st the individual opted to make the initial investment. The take-away is that if you can’t predict it, it makes it very difficult to plan for it.

The second curveball is the impact of taking withdrawals from an investment plan, discussed in “ Suffering from Withdrawals?” As investors shift from the accumulation to distribution stages of their life cycle, the negative consequences of large bear markets become much more pronounced. Market drawdowns are no longer opportunities to “buy on a low.” Instead, retirees are forced to liquidate their holdings during times of market weakness. The take-away from that post is withdrawing funds from a sinking market makes it all the more difficult to recover losses.

In this blog post, we combine these two analyses into what we call a “ WIT Analysis.” 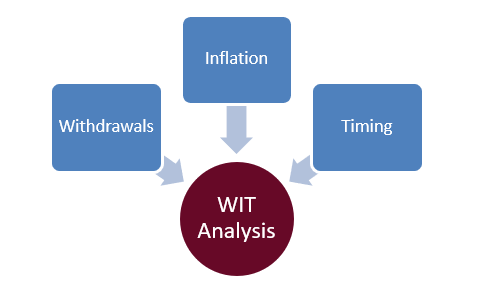 This explores the combined impact of withdrawals, inflation, and timing on an investment.The intent in using a WIT analysis is to examine how an investment plan might look after a decade in the real world if a retiree is forced to take withdrawals and had the bad luck of investing at the wrong time.

Like we did in previous posts, we assume an initial investment of $1,000,000 in one of three options:Each investment is made for ten years, starting on January 1st. The results are “rolled forward” yearly, meaning the first investment period extended from 1/1/98 to 12/31/07, the second investment period was from 1/1/99 to 12/31/08, and so forth.However, rather than assuming a simple buy-and-hold for each of those decades, we introduce the idea of taking out withdrawals, adjusted for inflation.At the end of each year, we take out $50,000, adjusted for a 2% inflation rate. 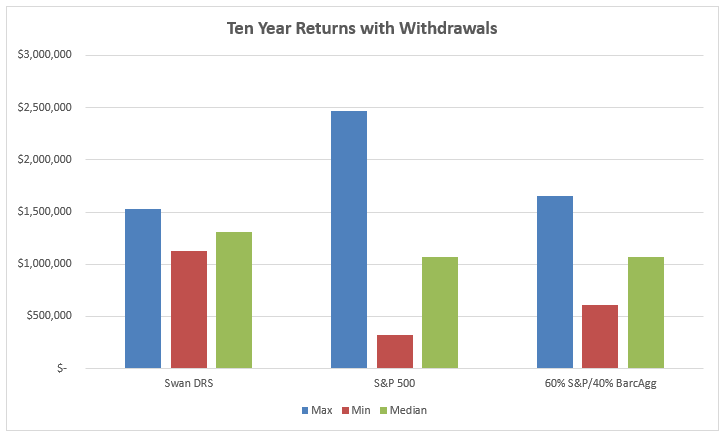 These results illustrate the prime objective of the Defined Risk Strategy: to strike the right balance between upside participation during bull markets and downside protection during bear markets. In doing so, we have typically been able to mitigate the sequence risk that plagues many retiree investors as they are in the distribution phase.Since its inception in July 1997, the DRS Select Composite has successfully navigated through three bull markets and two bear markets.We are often asked, “What is the appropriate time horizon in which to measure the DRS’s performance?” Our answer to that question is always a full market cycle—one that incorporates a bull and a bear. Except for one, each of the decades in this WIT analysis contain at least one bull and one bear market.