We are going to begin this week with our annual value lesson.

For those of our readers that have not read this before, we hope you enjoy this lesson and we hope that you gain some very keen insightas to what constitutes value and what constitutes individualistic, “because I can” mentality. First, we would like to say that there is a very big difference in the perceived meaning of the word value.People will often define value as something that offers a good deal relative to some other expected outcome or trade off. Some will say, value is getting something for a better than expected price. Others will use the analogy of value as being inherent to the individual? If we truly want to dig in philosophically, we could read Socrates, Plato and Kant, or let’s take Locke’s version of value or what he referred to as value-modes. Locke stated that the basic qualities of value pertain to psychological categories. Locke was definitively of the belief that “value” was not universal or objective, but shaped by the individual.We could take it further and state that value comes in varying forms, at varying times, and generally individualistic at any one single point in time. We can demonstrate this in the following example:Who values a bottle water more?The person sitting on their couch watching Game of Thrones from the comfort of their own home? Or the person who gets stranded on a desolate desert highway as their car breaks down in midday heat?You get the picture, now what we described here is what we refer to as a circumstance component for value, whereby a single point in time, depending upon one’s “circumstance” will emphasize or lessen one’s determination of value.As you are about to see, in this brief exercise that, and what will most certainly be agreed upon especially by those who do not often find themselves amongst our wealthy elite, that value to someone who is certainly well off, is vastly different from the average Joe’s perceived definition of value.It is what it is, excess capital means excess ability to afford excess goods and service, period. More money = more widgets kinda thing, however does “VALUE” change? Does a wealthy person not value money just as much as a poorer person would value money? Yes, on one end you have discretionary spending that allows for a greater tendency to over pay and on the other you have thrift and perhaps even just pure survival, bare bones if you will.The big question we have then is, if everyone value’s money for what it allows us to do, then universally no matter what your circumstance, shouldn’t we always try to get the best value we can, no matter what?Take all other considerations aside, if we merely treat money as fungible and we don’t place a greater emphasis or value upon it, then we are acting irrationally and we should be greatly concerned.So, let’s get to the example and see if you can figure out just how irrational things have gotten over the last 2 decades for some. Go into the example with the axiom that money has value for everyone and that it is irrational to merely disregard the loss of money or value as an individual preference. Also disregard that money lost in one place is gained in another, the zero-sum game proposition. Not everything is a zero-sum game, in fact if one person always wins and everyone always loses, you can see the inherent danger of this type of game. Eventually nobody is left to play…you get where I am going with this don’t you, cough, cough, central banks…Ok here is my example of value, you tell me if value is lost or not, we hope it is obvious:

Over the course of 16 years this single home’s value to the owner cost them $5.6 milliondollars. We can guarantee most of you will not micro analyze your shelter cost like this. We guarantee that many of you will argue that wealth matters and that this loss doesn’t matter. However, we said money = value is our axiom, so that rationality fails. The reality of this example is that for a decade and a half, the real value or monetary loss for this investor was over $5 million dollars.Does it matter or does it not? This certainly can be argued, but be very careful with your rationale and logic. We have demonstrated to you that value albeit has circumstance components, yea maybe this investor has a $100m in the bank and this doesn’t even figure into the thought process. What we are here to tell you is that type of mentality is inherently dangerous and do not fall for it.We have seen time and time again this kind of housing, mortgage, taxes pure destruction of value. They tell us often that housing is an investment and it most certainly is, but that doesn’t mean we should place a consistent “overvaluation” upon it. We feel like this same mentality has transpired into the U.S. equity markets as well and its why we decided to do this exercise here.Too much money(value) chasing too low of yields in order to compensate for too high of long-term liabilities. This is the quintessential definition of #risk in our book. We aren’t denying that markets are irrational, rather we posit that you find some very good reasons for placing overvaluations upon your investments. One of the things we want to do here is consistently force you to think outside the box and question your investing motives. You have heard us talk at length about the central banks QE policies of expanding balance sheets and expanding debt to benefit asset prices.How effective have the central bank policies of printing been on raising GDP you ask, this should be simple right, more money, more demand, more velocity, wrong. In fact, here is a graphic showing the Euro area central bank assets (purple line) and the Euro area GDP (brown line): 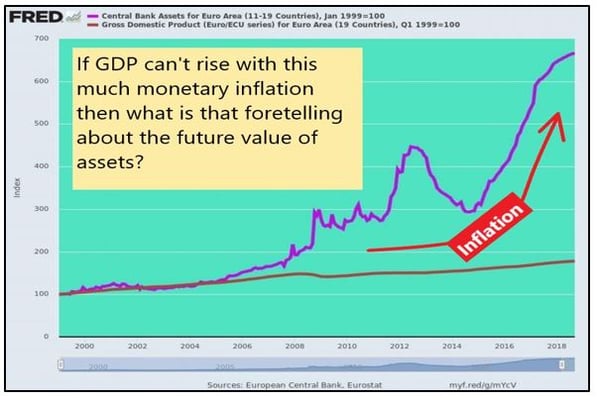 What we can tell you with utmost certainty is that global central bank policy causes one thing and one guaranteed thing only, a burgeoning wealth gap, or let’s just call it what it is, the “haves and have nots”:

Since 1987 the share of wealth in the US for the bottom 90% has fallen 10% to 21%, whereas the share of wealth going to the top 1% has risen 6% to 40% or to put it this way, 1% of the population controls 2x as much wealth as 90% of the population. Not exactly the recipe for a Republic Democracy, its looking more like an Oligarchy.But hey its central banking gone mad or shall we say “all in”! Let’s look at China, they might just be the worst culprit in all of this, in just one-decade China has managed to grow their overall debt by a factor of 4x. Basically if it’s not nailed down it will be bought, if it’s not built it will be built and well apparently debt doesn’t matter:

With central banks buying everything in sight, its no wonder that people’s quantitative abilities to define value are so distorted. Mises and the Austrian School of Economist’s warned heavily against this kind of mass hysteria, or shall we say psychosis. This seems to be a very fundamental generational adaptation that continues to morph each year, with each Fed chairperson appointment. We can’t say we like it, nor will we ever say we agree with it, but one thing we do know for certain, we can’t fight it. All in all, we also know the equity markets have certainly been lulled into a riskless flight to overvalue and this does have us a bit defensive.So, let’s look at a few technical equity charts starting with the German Dax market which has seen a nice rejection from our heavy fib resistance point of 11991. It has pulled back a bit, but the market is still bullish above 11662: 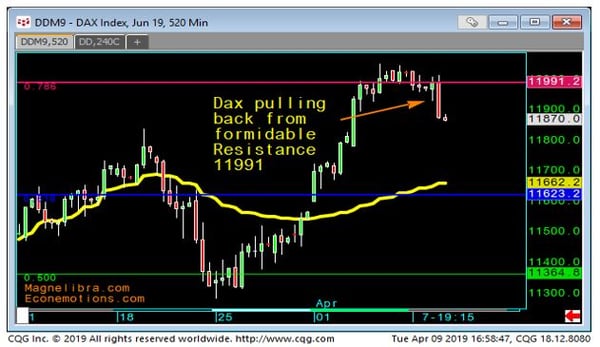 The Nasdaq market has certainly been the investors choice of alpha as it has destroyed the R2K and the SP500 here clearly outperforming. The following chart depicts the Nasdaq vs the SP500 and you can see a clear triple top forming near the 7700 area. We aren’t going to call a top here, but rather we are speculating that a turn from here may transpire and we are watchful: 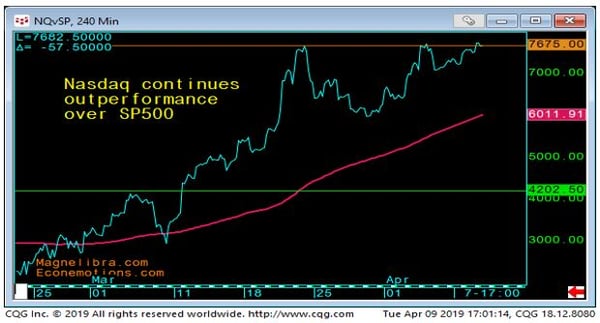 As far as the overall Nasdaq market which has been the equity market heavy lifter, we see that the bull is still intact, but 7546 is the prior top and a trade below there may bring in some momentum shifters: 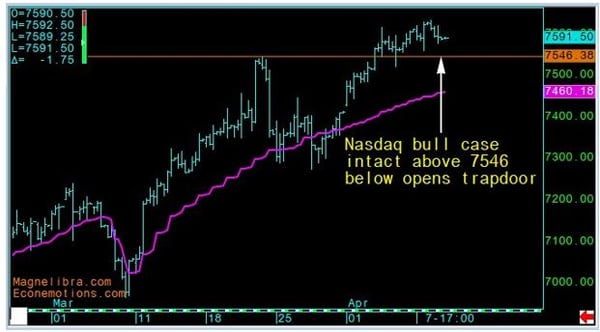 Ok so you know where we stand, bonds have been steady taking back some of the last few weeks run up and we are kind of in a watch and wait mode. The things that we are on the look out for are Brexit, any flare up in Venezuela and of course any developments upon the trade between China and the US. We witnessed a massive over subscription of the Saudi Arabian Aramco $12 billion bond offering which smashed expectations for its international bond issue as it was 9x oversubscribed hitting $100 billion dollars in orders. This certainly opens the door for a potential IPO over the coming years and what will certainly be a massive windfall for the oil producing nation. We thought some moralistic and conscious investors would boycott a bit here, but when there is this money at stake, well those thoughts go to the wayside. We also saw Lyft IPO and well fizzle below its IPO price. Our opinion of ride share companies is they are cashing out and that the business model is set up to fail. The drivers clog the roads waiting for pickups, they have no idea on how to drive or navigate without their GPS which means they are looking at their phones not the road, leading to accidents. Finally, their competitive advantage will slowly come to an end as the cab drivers have their own app now and eventually the local governments will start to tax them. Why Chicago hasn’t done it yet has us a bit perplexed. Finally, we want to comment on Bitcoin, it traded through $4k and is now back above $5k, our long-time readers know we love the technology and that the ecosystem will continue to grow. We also know the banks cannot compete in terms of efficiency and cost to transfer capital and as the blockchain ecosystem grows, Bitcoin will continue to advance with it. Obviously, that is all our opinion, but we want you to know that it is the technology that is sound and as a traded vehicle, well we hope to one day never convert it to fiat…till next time, cheers!Related: Discussing Options as a Strategic Investment with Larry McMillanFinally, we will decidedly end our notes with our reaffirmation of the growing need for alternative strategies. We would like to think that our alternative view on markets is consistent with our preference for alternative risk and alpha driven strategies. Alternatives offer the investor a unique opportunity at non correlated returns and overall risk diversification. We believe combining traditional strategies with an alternative solution gives an investor a well-rounded approach to managing their long term portfolio. With the growing concentration of risk involved in passive index funds, with newly created artificial intelligence led investing and overall market illiquidity in times of market stress, alternatives can offset some of these risks.It is our goal to keep you abreast of all the growing market risks as well as keep you aligned with potential alternative strategies to combat such risks. We hope you stay the course with us, ask more questions and become accustomed to looking at the markets from the same scope we do. Feel free to point out any inconsistencies, any questions that relate to the topics we talk about or even suggest certain markets that you may want more color upon.